DOES YOUR BRAND HAVE A MASCOT OR TALISMAN? 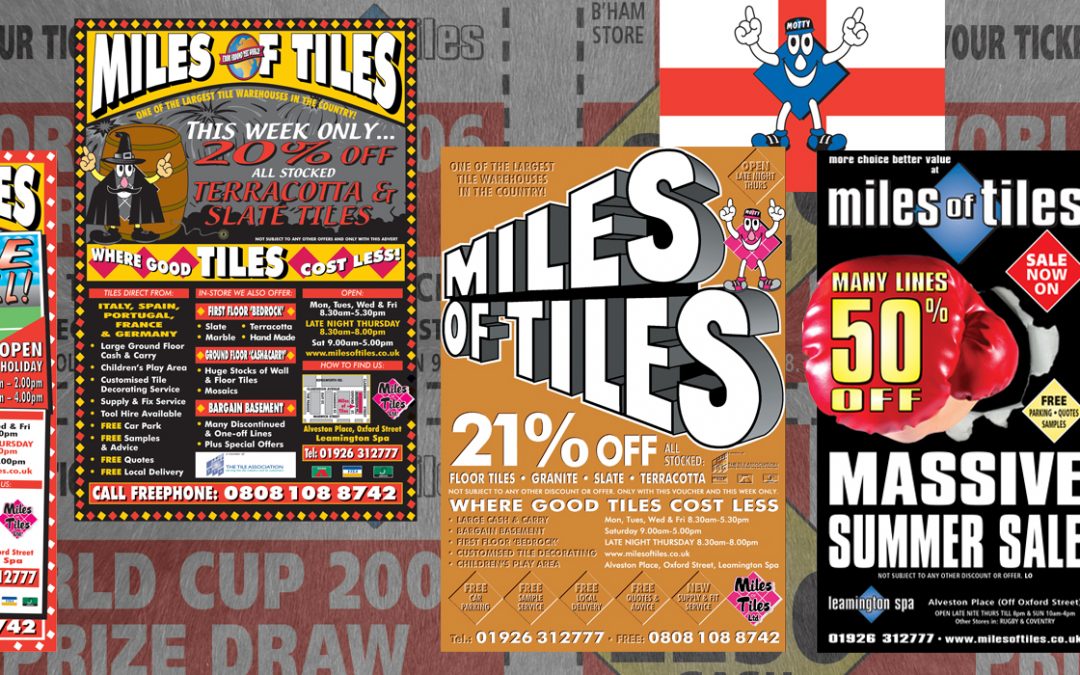 It’s a soggy Summer and another European Championships is well underway.
Have you spotted who the key players are in the tournament yet? Who is flying the flag for their nation and who is synonymous with their country and it’s success on the field.

Like the football, does your brand have a mascot or iconic figure that draws customers towards your product?
Who’s pulling in the pounds for you?

Back in 2001 we were invited to have a chat with the owner of a local Tile Retailer in Leamington Spa. Miles of Tiles is a well known showroom and supplier in the town and at the time had two stores – Miles of Tiles in Leamington Spa that was focused mainly on the retail sector and Tile Traders in Coventry that was selling almost exclusively to the trade. The issue they were having was that they wanted to advertise their vast array of products to both audiences, mainly through newspaper advertising, but lacked the in-house knowledge and skill set to be able to implement such a scheme.

After several meetings and consideration of the history and style of the business we devised two iconic cartoon characters – ‘Motty’ for Miles of Tiles and ‘Totty’ his female counterpart for Tile Traders. The two immediately appeared in the company’s newspaper adverts and were portrayed in different guises dependant on the offer for that particular week. The campaigns were a success as customers were encouraged to bring in their coded newspaper adverts from five or six local newspapers and magazines to redeem a discount on their purchase
of tiles or tile related products.

After time the directors decided to merge the two brands into Miles of Tiles, so Totty was phased out and Motty was exalted as ‘king of the tile retailers’ in the West Midlands. The company grew significantly in response to the boom in the building trade and renovation of residential and commercial property in the region. New shops were opened in Rugby and Birmingham, the Coventry store was re-branded (from Tile Traders to Miles of Tiles) and the flagship store in Leamington Spa was upgraded.

Motty became a cult figure in countless newspaper and magazine adverts, also appearing on billboards, internal and external signage, printed leaflets and brochures, plastic bags and promotional products. He even changed his appearance slightly, in line with the corporate re-branding of the company that we implemented in 2005. Not dissimilar to Tintin of comic book fame, Motty in his former years travelled the world appearing in nationalistic costume promoting the different styles of tiles from various countries. After the re-brand he appeared as the same iconic figure, with the same features and look on every piece of marketing material, thus strengthening the brand recognition.

One of Motty’s greatest adventures was in the Summer of 2002 and 2006 when the World Cup was held in South Korea and Japan and Germany respectively, where he was patriotically seen every week in the newspapers flying the flag of England and St. George!

Unfortunately, the property sector started to slow and came to a shuddering halt in 2008, when the reverberations of the Fannie Mae and Freddie Mac fall out were felt from the US housing collapse – advertising budgets were slashed and Motty failed to survive the storm. Motty had had a relatively short life appearing between 2001-2009, on hundreds and thousands of occasions across all types of printed media as mentioned before.

In his day Motty was a hero, a swashbuckling, intrepid explorer maturing into an iconic statesman of the brand. He shone brightly highlighting the sophistication and quality, as well as the massive variety of tiles and related
products that Miles of Tiles had to offer.

We all remember the footballing heros of our youth, as we do with the icons and talismen of our favourite products.
So who’s your company’s hero?

If you feel frustrated that:
• You don’t stand out from the crowd in your already crowded marketplace
• You’ve reached a plateau in terms of turnover and can’t break through that and require help with your prospecting activities?
• You’ve got a great product, your competitors are claiming the same, but you struggle to be different then don’t panic, we might be able to help you out?

If you are a CEO or business owner and looking to cultivate a memorable hero or heroine for your customers, then please feel comfortable in contacting us on the form below and we’ll see if we can make you a star.